The story about our northerly move on leg 2

I have never perceived ocean racing to be particularly risky. I don’t have a pull towards the risky aspect of it, I am purely in it for the boat-against-boat racing aspect. For sure things can happen, but as I am generally sailing with very skilled guys, I always feel quite safe. But I guess it is time to revisit the issue after two near-sinkings in just a bit more than one round the world race for me to date.
It was only the first morning after the Leg 1 start when the room in front of our forward watertight compartment quickly filled up with water. Fortunately it happened while we were still in “civilized” waters. For sure it would have been harder to limit the damage and keep the boat afloat had it happened mid South Atlantic, in the strong westerlies.
The carbon fiber boats are great – very light and stiff – until the carbon layers start delaminating / breaking. As we experienced in the 08-09 race when we almost sunk with “Ericsson 3” off Taiwan, a quite small puncture to the outer carbon fiber skin will quickly let water pressure explode the layers apart, especially in rough sea state / slamming conditions.
Now it is a very uncommon occurrence that this was to happen to me (and Richard Mason) two times in as many races, but it makes for a bit of re-evaluation of the risk/danger aspect of what we're doing.
Anyway, I never felt physically in danger as we were sailing in the Mediterranean, in daylight, in breezy but manageable conditions, communication systems still working and most of the crew in one piece (Andy man down as he broke his ankle a few hours before).
Falling over board is still my one fear on these boats, as stopping the boat and finding a person in the water at night in rough conditions within reasonable time will always be hard. However, for the period between the two last Volvo Ocean Races I have cycled competitively on the road, and I still feel more vulnerable at the bike than on the boat. But it might of course be because I have done far more miles on the boat and feel more comfortable in that environment. I guess also we spend far more time on the boats..
But to reduce the risk when falling overboard, I will take lots of care to get the life jacket on when appropriate, and try to get into the survival more than I use to. To be honest, I only think I used it once in the last race. It is just a bit of hassle to take it on and off all the time when I go back and forth between the nav station and talking to the guys on deck. I am also using both the VOR supplied R10 AIS personal beacon, and a personal EPIRB just in case.. 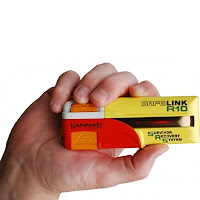 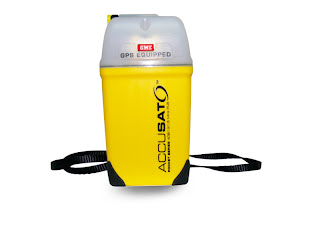 My blogging isn’t going well – 5 weeks since the last post. It is just a function of the pace in a Volvo Ocean Race, will try to check in more often until the start.

Last weekend we did the Qualifying Race, or Leg Zero, for this Volvo Ocean Race. This was the first time we lined up against the other boats – first in a couple of in-port laps, then “offshore” from Alicante to Palma de Mallorca and back. We didn’t get the best start, so chased around the first two laps. The breeze was very light and with the small race course we just had to do our best to keep clear air. 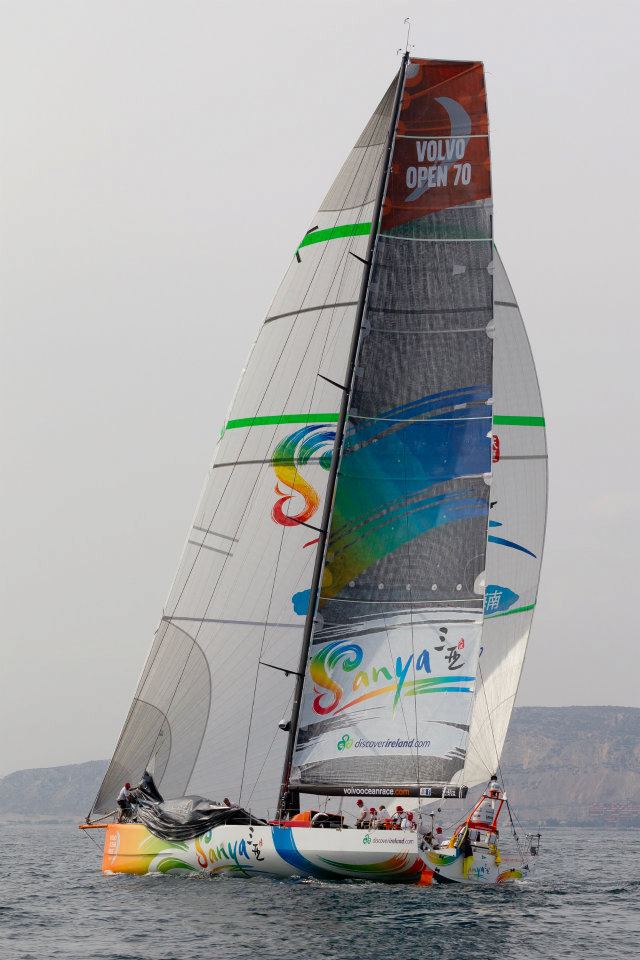 We were left a bit behind on the upwind up the coast to meet the expected northerly Mistral. During the race we had to do some safety drills for VOR Race Management, like Man Over Board drill, use the Emergency Steering System, sail with storm sails and deliver media content. Groupama seemed to have an issue locating or recovering their MOB, so we passed them and had a good fight up the coast where we slowly gained by sailing inside the gradual left shifting breeze.
Before the start we had a pretty clear picture that we wanted to sail south of Ibiza which lies on the rhumb line, so as soon as we thought we had “enough” north shift – we started in an easterly breeze – we shot off the coast towards Ibiza. Of course we wouldn’t like to split and loose a good chance of lining up against the opposition, but from our position slightly behind the fleet it was hard to cover them, so we sailed what we believed would be the fastest route.
It soon became clear that Abu Dhabi and us were the only ones heading for the gap between Ibiza and Formentura, with the rest of the fleet sailing north of the islands. Abu Dhabi were leading the fleet and sailed high to get up to the others, while we pushed east in anticipation of the strong easterly shift just after Ibiza that would enable us to sail north towards Palma again. It was too late for us to get north anyway, as we would have to take a loss to get there at that time.
To be continued..
Lagt inn av Aksel Magdahl kl. 6:49 PM 0 kommentarer

The Mistral is hard to forecast, at least west of Mallorca, and kicked in much later than forecast and stayed for a shorter time. None of the weather models we looked at for this race was close to the reality, and surely the other navigators will have scratched their heads as much as myself over this. So we chose to sail for the expected changes in the big picture (a high pressure system would move south over us), and what we could see. In the end one model seemed to resolve the situation better than the others, but I will keep that quiet in case the race start will be in similar conditions.
After Ibiza the right shift arrived as expected – with force. In the black night we were auto-tacked by the sudden 90-degrees shift, and ended up with the keel and stack still on the old side, heeled over nicely to 90 degrees until we got it all sorted. A good thing to experience this now and not during the race, damaging one sail and having us limping for a good while afterwards. This probably cost us the miles we were lacking to get in touch with the fleet again by Palma, we were about five miles behind Groupama and Abu Dhabi by Palma.
Leaving Palma and in the middle of the emergency steering drill, the breeze vanished and the fleet were parking randomly. Some boats seemed to have a clear strategy to sail north of Ibiza again, maybe due to one of the models predicting a northerly push there. We preferred to keep the boat moving in the right direction and keeping the options open for as long as possible, and ended up picking the gap between Ibiza and Formentura again. The more inshore oriented sailors onboard (no offence) complained about the sea state as we were really drifting for most the day in a funny swell, good practice for the race where we will see this several times.
Finally as we were south of Ibiza the breeze filled in from the south west where we were positioned behind Telefonica and Puma. From there on there were no real opportunities, we all sailed into the dying land breeze so the distances just increased. The northerly group finished several hours after us when the sea breeze filled in, except from Abu Dhabi who motored home and will have to complete their qualifier later! I heard a rumor that Puma never did their emergency rudder drill, so they might also have another go J
All in all good practice for us and a good result, nice for the team after all the hard work to get to where we are.
**Mistral is a strong wind from the Alps that strike the Mediterranean quite often. It is normally started by a high pressure in the Bay of Biscay bringing cold air over the mountains. You can read more about it here
**Rhumb line is the direct line between two waypoints.
Lagt inn av Aksel Magdahl kl. 7:00 AM 0 kommentarer

Had a couple of days “off” in Norway last weekend, then went straight to Newcastle to do the VOR Safety Training. Two very relevant days, made exactly for what we are doing. And even though our safety equipment is the best there is, what one are left with in the end is to not end up in a situation where you need it.
The first day was theory mostly on first aid, and a couple of hours of firefighting. I think most the VOR sailors have experienced some kind of fire onboard, particularly on the electrical system, which makes this quite relevant. But this course isn’t all about being taught what to do, after all the crews possess hands-on experience with most issues. Just as much as going through the syllabus, we discuss solutions to different scenarios and transfer experience between us. We didn’t have any fires during the last race, but a few ones in our preparation that we could sort out by turning the power off. However, Moose had a good one on ABN Amro where the batteries caught fire, which was hard to put out. We now have improved solutions for how to fight such fires.
The second day was mostly on the use of our safety equipment and life raft, ending up with a few hours in the “environmental” pool with waves, wind, tropical rain, noise and darkness. We did this before the last VOR as well, but it is very good with a refresher. Here we got familiar with setting up our life jackets, turning the life raft from upside down, getting into it, being inside it upside down and maintaining it. In reality, it is going to be quite rough when you have to get in it, so we train for that – getting rid of the water inside it, picking up and treating injured crew members and helicopter rescue.
The most uncomfortable I have been in life (I think!!) is swimming around backwards with the life jacket hood on. I just feel like I can’t breathe through the 6 or so tiny venting holes inside this completely fogged down hood of a tent. It is supposed to protect from breaking waves and heavy rain, but I just feel like I don’t have control of what’s going on around me. But got through it this time as well J
The final exercise this time around was to swim around in the pool with all the “environment” turned on, without the life jacket. Those who got in trouble was picked up by the divers, but we all seemed to be decent swimmers. Of course, it helped that we did this with survival suits on, not being dragged down by the wet weather gear being full of water.
Just sent this link to the instructors of the VOR Safety Course. It is one episode of the documentary on the Norwegian Rescue Services (330 squadron), a helicopter rescue of a Norwegian sailor in the North Sea at winter. Worth a look, but in Norwegian. Strong guy! http://www.nrk.no/nett-tv/klipp/475709/
Lagt inn av Aksel Magdahl kl. 7:09 PM 0 kommentarer